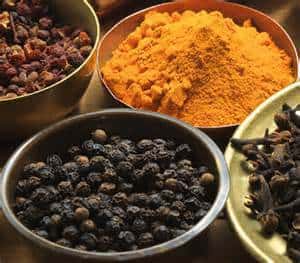 Why Black Pepper and Turmeric?

Just like approximately 5% of the spice turmeric is composed of an active compound called curcumin, about 5% of black pepper by weight is comprised of a compound called piperine. Curcumin is responsible for the yellow color of turmeric and piperine for the pungent flavor of pepper. Piperine is a potent inhibitor of drug metabolism. One of the ways our liver gets rid of foreign substances is making them water soluble so they can be more easily excreted. But this black pepper molecule inhibits that process.

And it doesn’t take much. If people are given a bunch of turmeric curcumin, within an hour there’s a little bump in the level in their blood stream. We don’t see a large increase because our liver is actively trying to get rid of it. But what if the process is suppressed by taking just a quarter teaspoon’s worth of black pepper? Then you see curcumin levels skyrocket. The same amount of curcumin consumed, but the bioavailability shoots up 2000%. Even just a little pinch of pepper – 1/20th of a teaspoon – can significantly boost levels. And guess what a common ingredient in curry powder is besides turmeric? – Black pepper.